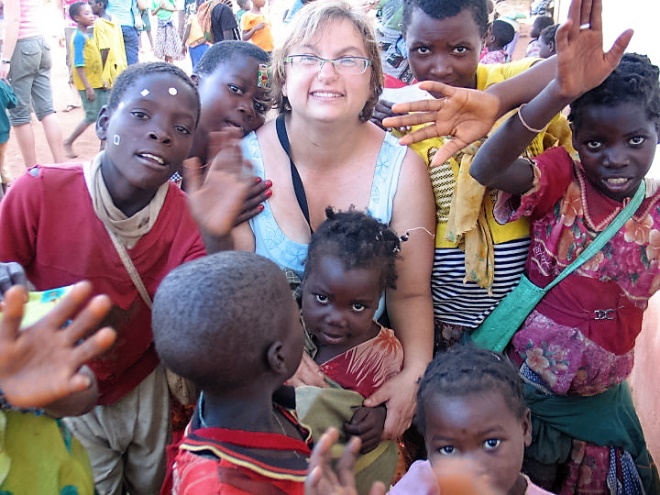 I plan to use these to train leaders

I’m Shannon Weiss and for the past 16 years I have been the Director of Student Development at Prairie College in Three Hills Alberta. My heart has been set on missions since becoming a believer in 1989. I always believed that at some point the Lord would lead me overseas but I had no real idea what that would look like. A few years after becoming a Christian I decided to go to Prairie for a degree in Drama. A program that really didn’t exist yet as it was in the early planning stages. I quickly realized that I needed to be at Prairie but in Intercultural studies instead. I switched programs and completed that degree in 1997. Following this I decided to pursue a Masters in Counselling at Providence in Manitoba. I then returned to Prairie College in 2000 as the “Dean of Women” where I have been ever since.  It has been my privilege to care for about 120-130 young women each year. I lead a team of about 14 female leaders that I mentor and disciple. Each of these leaders then leads a team of about 7-8 women. In addition to this, I co-teach a Christian 12 step program that leads people through forgiveness of self and others.

As part of my ministry, I have had the incredible opportunity to travel with student mission teams, as well as alone, to various parts of the world. This has allowed me to see the Love of God in action through various ministries and mission organizations.  I have traveled to China, Tibet, Papua New Guinea, and in 2010 I took a team to Mozambique to work with SAM Ministries. It was on this trip that I fell in love with the people of Mozambique and this mission. My heart has always been to love people and give them tools, opportunities, and care in such a way that they see the love of God and grow in their faith.

After coming home from Mozambique in 2010 I began to pray about what my role there might be one day. I continued to pray for the team and ministry there and in the winter of 2015 I contacted Dwight Lagore to see if I would be a fit for the ministry in Mozambique. I wanted so much to be part of what was happening but I also had some major commitments here at home. My mom was quite ill with congestive heart failure and I knew I couldn’t go while she was so ill.  So I continued to pray and continued to care for my mom. Those times with her are something I really cherish. In December 2015 the Lord took my sweet momma home. I had the incredible opportunity to be at her bedside with my family members and to pray her into the arms of Jesus.  It was a difficult experience that I wouldn’t have given up for the world.

As I returned home from B.C. after her funeral I again began to think about Mozambique. God placed the mission and the people on my heart daily and it became clearer that it was time to move forward. I contacted Dwight Lagore again and asked if we could meet when he came to Prairie in March. It didn’t take long for me to realize that this indeed was the time and the place God had in store for me. I hope to use my gifts of compassion and my training in counselling to aid the ministry. I plan to use these to train leaders. I would love to work with young women and show them that they are the beautiful daughters of the Most High King who loves them very much.  Over the last 2 years I have also been the Sunday School Superintendent at Bethel Church in Three Hills which has given me some excellent experience with children’s ministry.

God has given me such a wide variety of opportunities and experiences over the last number of years and I believe each of these has been part of training me for what he has in store next.

If you would like to donate toward my start-up fund or toward my regular support, please see the donate options on this web-site under Get Involved, How to Donate (My fund is Mozambique Leadership Training Partner). Or you can go straight to my giving page by clicking here.